“Last Man Standing” returned after a week away to bring the laughs and teach some lessons in the latest episode "HR's Rough n'Stuff." Mike Baxter has to find a place at the company for his doting son-in-law Kyle, but needs to launch a complicated scheme in order to make it happen in Season 7, Episode 8.

[SPOILER ALERT: The remainder of this article will discuss the latest episode of “Last Man Standing.”]

The episode opens with Ed coming into MIke’s office to reveal that Kyle simply isn’t working out at his position in Outdoor Man’s personnel department. Not only did he produce the most wishy-washy help wanted ad, but he also hired three people for the same job because he simply couldn’t say “no.”

Ed urges Mike to go easy on Kyle, but the fact of the matter is that he’s not working out and isn’t doing his job. He calls Kyle into his office to tell him that he’s done in personnel, but that the store is his family and he’ll find a place where he can thrive.

Later that night, Mike breaks the news to Mandy, who explains that Kyle feels like he’s failing at one job after another thanks to Mike’s constant switching. Mike, however, has a plan to make Kyle their new HR person given his propensity to be kind to others and have a more liberal approach to conflict. She makes it clear that this job has to work out or it will simply break Kyle, to which a determined Mike agrees.

The next day, things seem to be going well. Kyle hasn’t screwed anything major up, and human resources seems to be a job that he can properly wrap his head around. That is, until he brushes up against some real ethical conflict resolution.

As he works, Chuck and Joe come in and awkwardly explain that they want to file a complaint against Mike. Throughout the episode, Mike had been jabbing the duo with barbs about how they’re both fat and dumb. In fact, while they’re in the middle of complaining, he walks in and berates them more thinking he has impunity.

“I love being the boss,” he says as he walks away.

Realizing that disciplining the CEO and your father-in-law in one fell swoop is tricky territory even for a seasoned HR professional, Kyle seeks Ed’s help. He’s told that he needs to just buckle down and handle the conflict in the open, the way Outdoor Man wants things handled as a company.

He quickly has a disgruntled Mike, Chuck and Joe in his office where he mediates their bickering. Unfortunately, Mike simply can’t pull any punches and the argument gets heated, forcing Kyle to lay down the law. He shouts down all three of them and explains that, at Outdoor Man, they’re not just co-workers and friends, they’re family. With the room in stunned silence, Ed enters clapping.

Mike, Chuck and Joe join in the applause as they reveal that the fight was all an elaborate trick. It turns out, in an effort to keep his promise to Mandy, Mike wanted to test Kyle at the HR role, which he passed with flying colors.

Just like that, Mike has found a position that his son-in-law will thrive in, and the family unit can forge ahead to the next adventure. 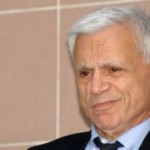 Robert Blake splits from wife Pamela Hudak after a year...